Sign up for updates
No Result
View All Result

No Result
View All Result

Now's the time for cities to embrace flexible options

Tr​ansportation is largely a world of slow, thoughtful decisions – infrastructure isn’t planned or built overnight, and transit systems can take decades to go from the drawing board to reality. But even against that backdrop, cities can take steps with their transportation systems today that will pay short- and long-term economic benefits in cost savings and flexibility.

Every major city is different, but the overall goal, economically, should be the same: Adopted policies should decrease the financial risk and burden of transportation on taxpayers. While congestion pricing may work in New York, it may be unnecessary in Phoenix or Houston.

This section focuses primarily on transit options, but opportunities that would spur economic development while delivering potential savings and flexibility also exist in highways, and zoning.

Major cities have options to promote mass transit development, including:

Partner with ridesharing companies to deliver and expand paratransit.

Cities can contract out transit operations and maintenance to private providers, potentially lowering expenditures and shifting the burden of unforeseen costs away from taxpayers. Private transit operators can also bring efficiencies of scale, best practices and innovations to local transit systems.

For contracting transit, a city should:

Private rideshare companies, such as Uber and Lyft, can offer better paratransit services at lower costs than traditional providers. While some individuals may require additional aid to enter a vehicle, ridesharing can capture much of the demand and even meet wheelchair accessibility guidelines. Paratransit ridesharing can make use of on-demand reservations using smart phones, which makes trip-planning easier, increasing mobility for those who need assistance.

To promote using ridesharing companies for paratransit a city should: 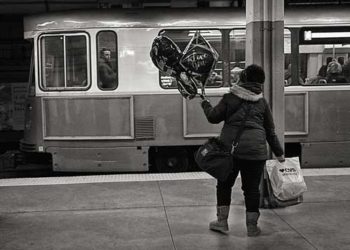 Additionally, cities can bundle together transit routes by geographic districts or route type. Bundling profitable and unprofitable transit routes into a single contract preserves service for the transit-dependent while allowing companies to remain profitable and competitive. Even with private operators, certain routes may continue to need subsidies either from the transit agency or directly through the city.

To end a transit agency monopoly a city should:

Cities should analyze bus ridership and service patterns every five to 10 years and adjust service accordingly. The needs of transit-dependent riders should be prioritized when determining publicly-subsidized routes. While some routes with limited demand may need subsidies, private operators can operate high-demand routes used by transit-choice riders who can afford to pay the full cost of the trip.

In 2015, Houston, Texas’s Metro transit agency successfully reorganized their bus network, cutting certain routes, shifting away from a hub-based pattern and expanding intra-suburban routes to meet demand and need. Planners found the biggest need was additional Sunday service and the agency cut weekday service to expand weekend service. Bus ridership grew in Houston despite nationwide declines in transit ridership. In the aftermath of Hurricane Harvey, Metro was able to restore service quickly and alter routes based on the needs of city residents.

NJ Transit is a counter example. Despite operating an extensive route network, service holes remain in suburban areas. Hip, a private bus company, is working to fill that void connecting suburban communities directly to Manhattan in areas NJ Transit underserves or does not serve at all.

To reorganize their bus network cites should:

Simplifying the permit process for private-sector transportation would promote transit that can survive in the market without subsidies, particularly modes that require minimal capital investment. The following four modes of transportation could meet demand in various cities: ridesharing, e-scooters, ferries and jitneys.

Electric scooters have demonstrated an ability to exist sustainably across the country, proving especially useful in regions with warm weather year-round. These companies often pay fees to the municipality for law enforcement costs and bike lane maintenance or expansion. However, overburdensome permit fees can force e-scooter companies to cease operations in a city, as Lime did in Tempe, Arizona, because of a $7,888 business license fee.

Ferries are important transportation assets in areas with major bodies of water. Ferry companies can operate profitable routes, set market-based parking fees and invest in real estate directly around their terminals. Capital costs for ferries are relatively low, as the body of water already exists, and non-fare revenue potential in real estate and paring is relatively high.

Some transit subsidies are needed to allow private companies to operate critical routes. Value-capture fees could fund these subsidies while shifting the burden to those who see the most economic benefit from transit. These fees take the form of property assessments on real estate within easy access of transit service, such as within ¼ mile of a rail or bus station. Requiring those who benefit from transit to provide some of the funding is fairer than blanket subsidies and promotes a responsible approach to system costs.

Bus Rapid Transit (BRT) has emerged as a cheaper alternative to heavy- or light-rail. While rail is perceived as a sexier option, transit riders main concern is transit quality not type of vehicle. Further, bus rapid transit can be 1/3 to 1/9 cheaper to construct than a rail line. Bus rapid transit has six features that distinguish it from traditional bus service: running ways that gives buses priority, unique station design, larger vehicles, electronic off-board fare collection, intelligent transportation systems such as transit signal priority, and frequent service.

There are three different types of BRT. BRT heavy, which dedicates a lane to buses, works best on surface streets with 20 or more buses per hour per direction. BRT lite, in which buses share a lane with cars but receive priority green signals at traffic lights works best on surface streets with fewer than 20 buses per hour per direction. Freeway BRT operates on priced managed lanes on freeway and includes premium stations in roadway medians. Los Angeles has an extensive BRT network with all three types of BRT lines.

To enhance bus-transit service cities should:

A portion of freight traffic in major cities is traveling between metro areas on major surface streets. Cities need to protect arterials to allow trucks to move through cities without using local neighborhood streets. While large trucks are unpopular, they transport vital goods important for the economy of cities. Excessive traffic calming causes trucks to use local streets, harming quality of life and decreasing safety.

Collector highways connect residential streets to arterial highways. Accordingly, the type of traffic on collector roads may not merit the same lane width as arterial highways. Where demand exists and conditions conducive, cities can reduce lane widths from 12 to 10.5 feet and use the additional space to construct dedicated bike planes, which encourage active transport and electric scooters.

To add bikes to select collector highways, major cities should:

Dense cities that lack the ability to expand road capacity can use congestion pricing to manage demand for roadways. Congestion pricing comes in many forms. On some highways, including I-495 in Northern Virginia (the Capital Beltway) variably-priced managed lanes provide an option to the non-priced general purpose lanes. On other highways, including I-66 inside the beltway in Northern Virginia all lanes are congestion-priced with rates rising or falling based on demand. New York is the first American city pursuing cordon pricing, a form of congestion pricing that charges a fee to enter a geographic area.

Overall, variable pricing should be set to levels based on the effects of the charge on demand, not to meet revenue projections. Revenue may be used to develop bus lanes or to improve roadway operations including traffic signal timing. Unfortunately, in New York’s case prices are set to generate a specific revenue target not to improve transportation in the corridor. Further, all of the revenue is devoted to transit.

The demand for parking and the feasibility of constructing additional parking varies across a city. Major cities should introduce variably-priced parking that matches demand with supply. Street parking can be priced, with a maximum time allowed to encourage additional commerce in business areas. Variable priced parking should be designed based on demand, not to maximize revenue.

To expand pried parking cities can:

Managed arterials are major surface streets with optional variably-tolled underpasses at major intersections. Managed arterials can suffer severe traffic congestion particularly during peak periods. Drivers can pay a small toll, typically 15-25 cents to use each underpass, which is used for construction and maintenance of the underpass. Buses can use the underpasses for free. As a result of the tunnel, the surface street can be narrowed at the intersection, making a more welcoming environment with greater walkability.

In order to justify creating a bus-only lane, a roadway needs 20 or more buses per hour per direction. Managed arterials provide a better transit option. In addition to providing the same high-quality bus service as bus-only lanes they use the revenue that drivers pay to build and maintain the underpasses. Busways do not generate any revenue. Decreased congestion also reduces commuter stress and reduces greenhouse gas emissions.

To encourage managed arterials, cities should:

Some cities, such as Portland and San Jose, have urban growth boundaries (UGBs) that restrict development on the urban fringe.

When a UGB is removed, or in cases where one never existed, such as Las Vegas or Dallas, cities may enact developer impact fees that will place the cost of transportation expansion onto the developers who profit from the expansion of the urban area and its transportation network. Developer impact fee revenue, particularly for urban fringe development, should be nearly all dedicated to the relevant road infrastructure.

To reduce the overall costs of housing cities should:

Traditional zoning divides up the city by specific uses, such as single-family residential, multi-family residential, commercial and industrial. It’s a system that limits how land-owners can improve their property – for example, a homeowner in a single-family district may be forbidden from converting an underused garage or basement into an apartment with a full kitchen.

The result? A less-flexible housing supply and higher housing costs.

Mixed-used zoning would help address housing affordability – a key component of most economically vibrant communities — by increasing supply in commercial and industrial areas.

Relaxed zoning also promotes economic activity and removes the barrier of renting appropriately zoned real estate for new business. Home-owners interested in starting a small business that falls under industrial or commercial labels would be able to begin operations sooner in their on their own property and with decreased financial risks as compared to renting an entirely new property. Houston, TX lacks a formal zoning code and is a very diverse, quickly-growing city.

To relax their zoning codes, cities should:

Baruch Feigenbaum is senior managing director of transportation policy at Reason Foundation and lead author of Reason's Annual Highway Report. Feigenbaum has a diverse background researching and implementing transportation issues including revenue and finance, public-private partnerships, highways, transit, land use, and local policymaking. Feigenbaum earned his master's degree in Transportation Planning with a focus in engineering from the Georgia Institute of Technology.

STAY SMART ABOUT CITIES.
SIGN UP FOR BCP'S NEWSLETTER.

Download The Full Playbook
No Result
View All Result